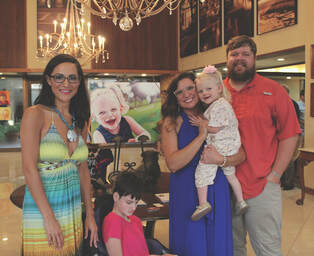 On September 19th, Whitney Trisler Causey showcased her collection of artwork at the Marbury Alumni Center. Whitney is an active exhibiting artist with her work being showcased around the country in places like Chautauqua Institution in New York and the Manifest Gallery and Drawing Center in Cleveland, Ohio. She has also participated in designing and painting multiple murals around Ruston, Louisiana.
Whitney is an Assistant Professor of Studio Art here at Louisiana Tech University. While teaching in the Foundations Department, she found time to create a series of portraits that are dedicated to spreading the idea that disabilities do not define people.
To understand her series, you first have to understand her story. At the art exhibit, Whitney gave a tear-jerking yet inspiring speech about her two-year-old daughter’s rare neurogenetic disorder known as Angelman Syndrome, a genetic disorder that affects the nervous system. Currently, there are around 30 portraits with more coming. Each portrait is based on children around the world who were born in 2016 and have been diagnosed with Angelman Syndrome.
The portraits are meant to capture the happiness they release, so Whitney uses bright colors as the background to share that happiness with the viewers. The use of color is also meant to change the viewer's perception of the child once they realize they have Angelman Syndrome.
With her daughter and children around the world as inspiration, Whitney used her artistic ability as “a way to disrupt the connection between disability and ‘the ugly.’”
Causey’s use of art to “slow down the fast-paced world” and her belief of art being  “a tool in the construction of societal values,” led her to this beautiful series that was presented at Tech.
The Art exhibit was put on by the VISTA Center. The  VISTA Director, Mr. Nick Bustamante the Professor of Studio Art,  and the VISTA Associate Director, Dr. Jamie Newman associate professor of Biological Sciences, were present at the exhibit expressing their admiration for Whitney and their joy in being able to help support this type of event.  The exhibit was attended by Louisiana Tech University faculty, administrators, and students as well as members of the local Ruston community and surrounding Angelman Syndrome family 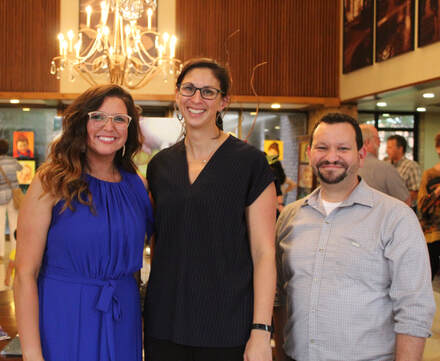